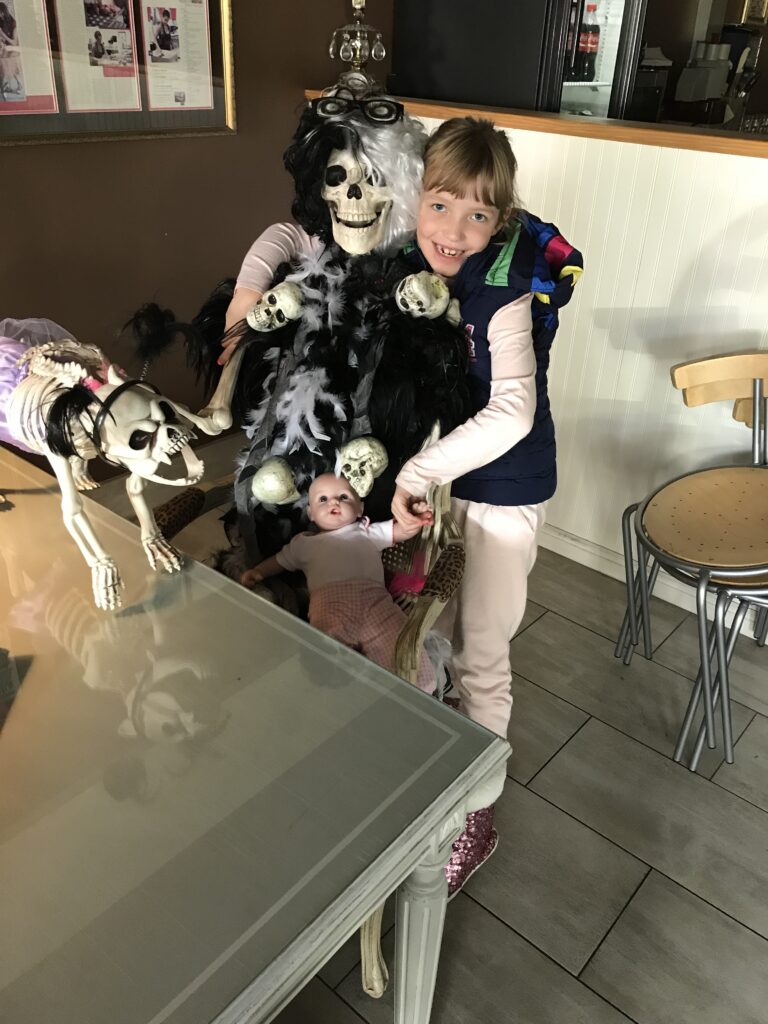 There is a story that needs to be told. I began reading to children years ago when I worked at a mental health center. I fell in love with children’s books and the way the stories bring people together through humor, ideas, questions, emotions, and a shared experience. I then went on to open a cupcake store in honor of my daughter who lives with cerebral palsy. The name of the bakery is So Cupcake and it is a very special place.

I began doing birthday parties and tea parties for children at my bakery. Once again, I found myself reading stories and experiencing that same joy with a whole new group of kids. I even started a “So Story Time” on So Cupcake’s website to reach more children to hear a story once a week.

This is the story of Grannie Rattle Cakes and One-half Ron. Where does their story begin? Five years ago, I started having a skeleton sitting in my cupcake store during the month of October. I would dress her up in different outfits and had a contest to decide on her name. The winner won a dozen cupcakes. Along the way, the lady skeleton got a little dog skeleton companion. They became a funny and warm duo that greeted customers during the Halloween season.

I started watching them hanging out at the bakery and the way that children and adults would respond to them. I began to wonder what happens to skeletons after Halloween. Did they have their own party afterwards? Did they make friends with other skeletons? What adventures did they have? Did they keep making people smile even after the holiday is over? I knew there was something there. I felt the same way about Grannie Rattle Cakes and One-half Ron as I did about opening my cupcake store. It needed to happen, it needed to come forth, and it needed to be shared.

I have a very talented mother named Claudia Fornage. Her inspiration helped me find the beloved name of my bakery and I knew she could help me with this story. We began to write a first draft that would become the Grannie Rattle Cakes and One-half Ron series of stories. I then reached out to the artist Monica Rockwood Stamm, who did all the illustrations for the cupcake store’s website. She loved the idea and embarked on the journey to draw the concepts that my mom and I had started. Out of this collaboration, grew our first book titled What a Bona Fide Pair.

In the upcoming stories, Grannie Rattle Cakes and One-half Ron do a lot more after the month of October. They do some fixing-up, help organize a pet washing, attend a baseball game, fly to the North Pole, talk to ghosts, some sticky and some not, and even go on vacation. In the end, they discover that hanging out at the bakery and helping others was really the best adventure of all.

I want to thank my mom and Monica for saying “YES” to this venture. Their talent, humor, and sensitivity are transparent throughout these stories. Be watching for the escapades of Grannie Rattle Cakes and One-half Ron to unfold in this eight-book series!